The UK Civil Service is both renowned and respected throughout the world, yet few see inside its ivory towers. Its 445,480 strong workforce comprises one of the largest employers in the country and is based in towns and cities across the UK, spanning everything from customs and benefit officers to policy chiefs and permanent secretaries. Yet what it takes to make a successful civil service career has, for many years, been unclear.

A new report from the Social Mobility Commission provides the first independent data-driven analysis of social background and career progression in the Civil Service.

But, first, what is the Social Mobility Commission? The UK’s Social Mobility Commission is an independent advisory non-departmental public body established under the Life Chances Act 2010 as modified by the Welfare Reform and Work Act 2016. It has a duty to assess progress in improving social mobility in the UK and to promote social mobility in England. In May 2021 the Commission’s report, “Navigating the labyrinth: Socio-economic background and career progression within the Civil Service” was published.

The study is based on data from an internal Civil Service survey which had around 300,000 respondents. This dataset was complemented by over 100 hour-long interviews which give deep insights into how people progress in the Civil Service, how they get to the top and how they subtly use existing networks.

Though the UK Civil Service aims to be a trailblazer for diversity efforts and to be the UK’s most inclusive employer the report demonstrates the need to put class and socio-economic inclusivity at the centre of the organisation’s drive toward inclusion and fairness. It has significant insights for organisational development but, and this is the focus of this article, it is also a rare and important source of information for those developing their own careers in the civil service.

For example, the Commission found that:

The evidence shows that those from low socio-economic backgrounds (SEBs) are less likely to work in areas of the Civil Service that accelerate progression, notably departments including Her Majesty’s Treasury, professions like policy, and the roles which give exposure to the political epicentre of London’s Whitehall.

There are strong regional divides too:

What the Commission’s findings have to say about career progression 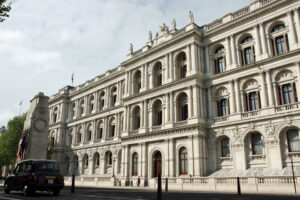 Civil Service career progression is rarely simple or direct. There is a viable route to the centre for everyone but this route remains largely hidden.

Whilst there are formal sets of guidelines around progression there is also an informal, unwritten set of “rules and norms” and mastery of these rules and norms is critical to career progression.

The Commission helpfully capture these rules in ways that those seeking UK Civil Service career progression should pay careful attention to.

Here are some of the Commision’s key points from an individual career progression perspective.

These roles give exposure to Ministers and senior officials – notably in private office, the ‘central’ departments, running a Parliamentary bill team, securing a leading role during a national crisis, or as a Minister’s private secretary. However, unless an individual is part of the Civil Service Fast Track knowledge of these so-called ‘accelerator roles’ is often contingent on access to ‘organisational guides’: informal mentors who understand the system.

These ‘grey areas’ include informal interactions with hiring managers, requests for promotion, threats to leave, and embellishing job applications. While those from higher SEBs tend to exploit the ambiguity of these ‘interpretative moments’ and cultivate opportunities, those from lower SEBs often report confusion or ethical discomfort.

3. Where you work, geographically, can be as important as who you know and how you deal with uncertainty.

London. There are a whole variety of reasons why taking the opportunity of a London posting is likely to accelerate career development in the Home (domestic) Civil Service and the Commission’s report examines these in detail.

Many civil servants from low SEBs see fast progressing policy work as dependent on mastering a behavioural code – which the Commission dub ‘studied neutrality’ – and this tilts in favour of those from advantaged backgrounds.

In turn, the Commission’s report concludes that for individual’s career progression, the mastery of this behavioural code, though sometimes seen as alienating and intimidating, is the primary key to accelerated career progression.

What is studied neutrality?

According to the Commission, and as anyone who is familiar with the TV dramas “Yes Minister” and “Yes Prime Minister” will know, studied neutrality has three key dimensions:

1. A particular received pronunciation (RP) accent and style of speech.

2. An emotionally detached and understated self-presentation.

3. An intellectual approach to culture and politics that prizes the display of in-depth knowledge for its own sake (and not directly related to work).

The Commission conclude: “Those from low SEBs find this code alienating and intimidating but one which they must assimilate in order to succeed.”

Analysis of the several informal ‘rules of progression’ that act as barriers to career development for those from low SEBs provides some invaluable guidance for those seeking rapid advancement in the UK Civil Service. We can simply state this guidance as follows:

1. For accelerated career progression, seek out and cultivate a relationship with an established, senior, internal, informal guide or mentor. Discuss with them the available accelerator career tracks and seek their advice and informal sponsorship for entry to these tracks. Having such a well-chosen relationship and managing it well can provide access to critical informal information and help you to navigate the hidden rules of the labyrinth. (To some extent, as the Commission report notes, cultivating this kind of relationship can provide an individual with the tacit knowledge that is frequently acquired through membership of the Civil Service Fast Stream).

The Commission’s report finds that these ‘guide’ relationships were almost always established in the first instance based on a sense of cultural connection or affinity – shared leisure pursuits, shared tastes and shared humour. These types of connections tend to act as the glue that facilitates a sense of trust and bonding.

2. Look out for times of organisational ambiguity and seek to negotiate opportunities in these moments – drawing on the organisational wisdom of your experienced guide. Securing a leading role during a national crisis – and performing well – is a great career progression accelerator.

An example of one of these valuable times of ambiguity concerns is applying, internally, for a job, or when making speculatively enquiring about future job opportunities in the Civil Service. The Commission found that among many they spoke to, and particularly among those from higher socio-economic backgrounds, the accepted first step is to reach out via email or telephone and then organise a time to talk in-person.

“This was partly because they give people the opportunity to gain more specific information about what hiring managers are looking for from candidates. But most acknowledged that such exchanges were about more than just information gathering; they were an opportunity to ingratiate, to ‘sell yourself’ to an important gatekeeper.”

An organisational guide can help the potential applicant to judge how they come across during these important pre-interview interviews. There is a fine line to be walked between being charming without being sycophantic, mentioning some prior relevant experience without being ‘overly salesy’ and gathering information about what the job actually requires!

3. Recognise and plan around the ‘Whitehall effect’: stay at the centre of the wheel. There are (still) far more top-grade posts located in London. For example, 66% of all senior civil servants and 45% of all Grade 6/Grade 7 staff are based in the capital compared to 3% and 7%, respectively, in the north-west.

Seek an early career posting in a private office or experience in a ‘central department’ which has central coordinating remits like HM Treasury or within high-prized areas of Cabinet Office such as Number 10 or the Economic and Domestic Affairs Secretariat (EDS) or on a bill team. Study ministers carefully and aim to achieve a private secretary role as soon as possible working alongside a rising ministerial star.

Now to a very large extent this advice runs counter to the formal guidance on progression in the Civil Service. The Commission recognise this and state: “Here the emphasis is on building ‘success profiles’ by accumulating a wide variety of skills in different areas. Of course, this is still important for general Civil Service progression, but interviewees stressed that for those aiming to reach the Senior Civil Service (SCS), and particularly the upper grades of SCS, a narrower trajectory was prized.”

4. Anticipate and steer carefully around bottlenecks in operational career tracks.

5. Study the dominant behavioural codes in the organisation and adapt some of your own behaviours some of the time – when and how you can.

The “studied neutrality” that the Commission report discusses in considerable detail cannot be easily reduced to one particular aspect of Civil Service occupational culture. The Commission see it as a ‘package of behaviours’, a way of being at work, that other civil servants – mainly senior civil servants from high socio-economic backgrounds – know when they ‘see it’. And crucially mastering it is crucial to getting on. It is a key way of signalling that you are the ‘right type’ of civil servant, that you ‘fit’. How that aligns and also conflicts with the notion of ‘bringing your whole self to work’ is well discussed in the report and something that could valuably be explored through meetings with a guide.

You may not find the Commission’s report filed under “UK civil service career development” but reading it with individual career progression in mind is an excellent use of time for anyone interested in getting on in the UK civil service today. Find it here.

Photo acknowledgment: The exterior photograph of the main FCOD building in Whitehall is used under OGL license and the source acknowledged as: By UK Government – https://www.gov.uk/government/news/foreign-secretary-commemorates-world-war-1-centenary, OGL 2, https://commons.wikimedia.org/w/index.php?curid=34599566